Now I am a great fan of the work of Mr Llwyd Roberts. 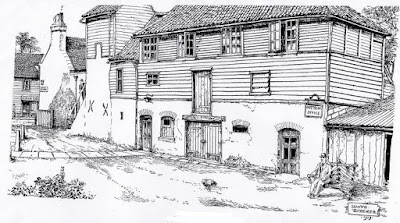 He was during the 1930s our artist in residence and during that time produced a heap of line drawings of Eltham and the surrounding area.

Some were reproduced from old photographs while others  were as he saw them at the time.

This is old Brewery which  which dates from 1928 in a building which according to Mr Roberts "originally a brewery, the upper floor of this building was later converted into the Baptist Meeting Room.  The brewery stood at the entrance of Jubilee Cottages, and the building was pulled down in 1928."

Email ThisBlogThis!Share to TwitterShare to FacebookShare to Pinterest
Labels: Eltham, Eltham in the 1920s, Llwyd Roberts