Another in the series from Eddy 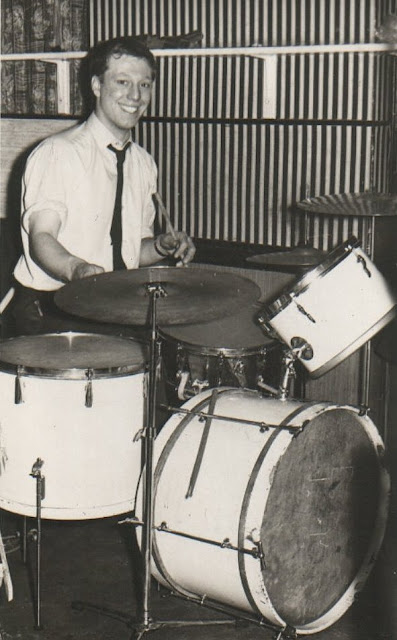 I had a tremendous boost to my ego and confidence soon after that. John and Dick the guitar and bass player with the Vampires group had a wedding gig to do in a pub, and they needed a drummer. Ron was unavailable and so I was asked to do it.

As I had suffered some verbal abuse from John, I was more than little nervous about doing the gig. However, I did the gig and earned the praise and respect from them.

I had finally won them over. It was not long after that they joined Brian Epstein and went fully professional and toured with the Beatles.

They became the chosen band to back most of the visiting American rock stars like Brenda Lee, Jerry Lee Lewis, Little Richard and Gene Vincent.

There finest hour was warming up the audience in the Shea Stadium in America on a famous Beatles tour there. The Beatles went on and took British rock and roll music to a dominating force in the 1960’s.

My apprenticeship with OPC was going along as expected. I was getting experience in various factory departments and a couple of things happened to me that became very memorable. I had to spend a period of time in the electrical test department. This involved in testing the solenoids to see if they would perform to specification.

As a solenoid had to move through a distance and pull a switch we had to mount it up on a jig and fix weights to the plunger end via pulleys and connect the coil terminals to an electrical supply. Switching on the solenoid would pull the weight correctly and pass its test. We were supposed to switch off the mains before disconnecting it from the coil, but you could do them quicker if you just held only one wire at a time, and as we were standing on rubber mats we would not get an electrical shock provided you did not touch the actual live wire.

Well, I got too clever with this skill and managed to connect myself up to about 350 volts AC and the shock that went through my body sent me back towards a fire escape hitting the handles the doors burst opened, and I ended up outside the doors onto the fire escape itself. I was very lucky not to have been killed. My colleague’s thought it was very funny and I did feel stupid having put myself in this situation. I recovered and carried on testing the solenoids. Only, this time, I had very serious respect for the power of electricity. All this was a long time before health and standards regulations were brought in to safeguard idiots like me ending up killing himself.

The other incident happened whilst I was working in the coil winding shop. All the winding machines were driven by a common electric motor and the speed was controlled by a foot treadle, by pushing it further down the faster the machine would work and more coils could be produced.

I had a go on a machine and was basically experimenting with it to see what it was capable of doing. I ran it up to a fast speed and the wire broke and something went into by eye. It was very painful and I went to see the works medical sister and she said I must go and visit the local hospital for them to see it. I had a piece of copper wire embedded in the centre of my eye and she was not going to remove it on her own.

I saw a doctor who put some painkilling drops in the eye and removed the wire. I was then told that I ought to go to the London Moorefield’s eye hospital for a specialist to see it as it had damaged the pupil. So I reported back to work and with my eye covered up I took myself off to London.

I finally got there and the specialist said he would like me to stay in the hospital for a few days for observation. I was in a ward with two other people and later on that evening I had an injection of penicillin into the eye to guard against infection. That was very painful.

By this time mum and dad had been told that their son was in a London hospital and came to visit me. I was in the hospital for four days and on Saturday Tim brought his new girlfriend to see me.

Her name was Maureen she was a lovely person and had a wonderful personality I think I fell in love with her myself. Tim was well smitten with Bunny as she was more commonly called.

She lived in New Eltham. I was very pleased Tim had made the effort to come all that way to see me. I eventually came home and work carried on as usual. Later on Gillian and I with Bunny and Tim went on a trip to London and went on a river boat from Greenwich to Westminster. This was just before I got the big elbow from Gillian.