A water trough and a tram transformer now that’s value for money .......... up Manchester Road 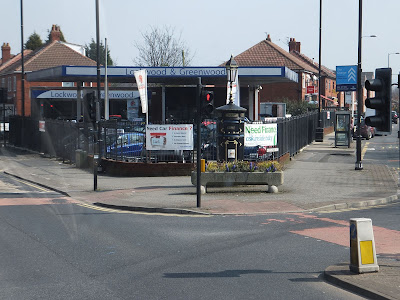 Now as water troughs go this is one I had all but forgotten.

It is situated where Manchester Road and Audenshaw Road diverge and I passed it pretty much every day when we lived in Ashton back in the 1970s.

And I have Ron to thank for supplying the pictures and setting me off on the story.

It was erected in 1879 and is made of polished Cornish granite and carried the inscription "THE RIGHTEOUS MAN REGARDETH THE LIFE OF HIS BEAST" and like so many it is now used as a flower tub.

But in the late 19th century and into the 20th it would have offered up a welcome break for carters and farmers travelling the Manchester Road.

Nearby was the canal and up ahead were the mills of Ashton and not so far away that jam factory,
Like many people I just took water troughs for granted.

They were a bit of that street furniture which were always there and when I was growing up still offered water to passing horses pulling milk floats and the carts of the local rag and bone man.

That said by the mid 1950s there wasn’t that much demand and the one near us was usually dry filled only with some decaying leaves bits of litter and a thin layer of grit.

But once they had been an important part of the landscape as was the tram transformer which I have to say I also took for granted. 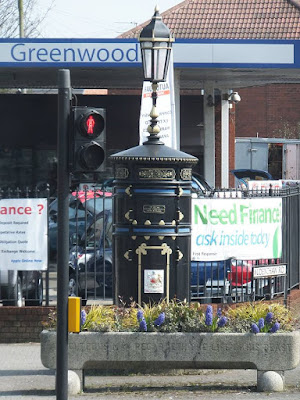 In fact if I am honest I don’t think the one which stands behind the Audenshaw trough even registered with me.

It dates from around 1903, carried the coat of arms of Manchester Corporation and was made by the British Electric Transformer Company.

And the date also fits with the extension by Manchester Corporation Tramways of its route to Audenshaw from Piccadilly.

This transformer pillar was restored by Norweb in 1983 and given its distinctive black and gold colour scheme.

I might be wrong but I rather remember is as painted a dull matt light green but then it was a long time ago.

All of which just leaves me to thank Ron for providing the images, jogging my memory and offering up another little obsession to sit with that of ghost signs.*

*The Ghost Sign, http://chorltonhistory.blogspot.co.uk/search/label/The%20Ghost%20Sign
Posted by Andrew Simpson at 02:30