Now shop fronts and their entrances do get rather overlooked, which is a shame, because the old traditional ones which will date back a century or more are vanishing.

I fully accept that back then they were fairly uniform in their design but the move to big glass fronted entrances in the 1950s and 60s did for many of them.

Since then a lot more have vanished as town and city centers get re designed.

All of which makes a visit to Ashton quite rewarding.

Lots of them still exist and unlike their counterparts in south Manchester have not become smart cafes, or wine bars

Instead they are still offering up the sort of things that elsewhere you can only get online of a big supermarket.

Which just leaves me to thank the owners of Corletts Interiors on Stamford Street for letting me take a picture of their shop. 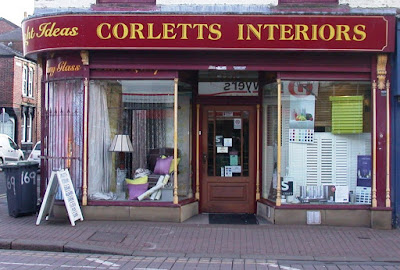 And I rather think I have a new short series in the offing.

Picture;  Corletts Interiors, Ashton-Under-Lyne, 2016 from the collection of Andrew Simpson