“Just spotted the third of the two towers” ........ stories of more development

“Just spotted the third of the two towers ( I know this is neither mathematically nor grammatically correct) but this is how it will be described henceforward......and after that the fourth of the two towers”....... Andy Robertson June 2018 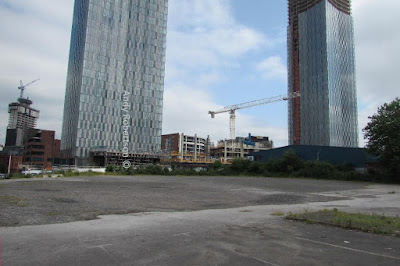 And so begins another series of pictures and stories to accompany the rise of yet another tall residential block, which will no doubt come to match the existing two which are fast reaching into the sky and their completion date.

Those two are the Owen Street towers and I have written about the extensively since Andy first started sending over the pictures.

Future historians will have a lot to thank Andy for, because for a decade and a bit he has been recording the changing sky line of the Twin Cities of Manchester and Salford.

Unlike some photographers who take the carefully posed shot and move on Andy returns regularly to the same developments chronicling each stage from demolition to new build and on to the final completion. 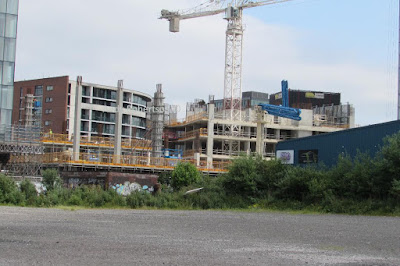 And he has a knack of finding those properties which are doomed to vanish.

That said he is a accomplished photographer and many of his pictures would stand out just for their artistic merit let along their place in our history.

So this will only be the beginning of the “third of two”.

Location; beside the Owen Street Development,

Picture; the “third of two”, 2018 from the collection of Andy Robertson