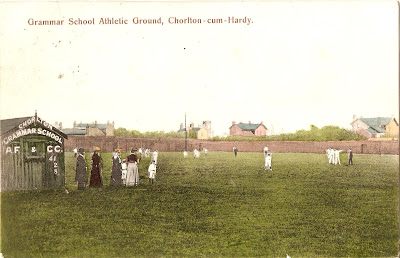 It is the July of 1906 and you are looking at the school athletic ground.  The picture I think perfectly conveys that image of mid Edwardian Britain.  On the surface the country seems at ease with itself, the weather that year was good and from August through to September we experienced a heat wave.

Of course the realities were a little different.  There was a European arms race, a growing mistrust of the military and imperialist ambitions of Germany and at home the simmering class conflict which was about to break out into a period of industrial unrest. http://chorltonhistory.blogspot.co.uk/search/label/Story%20of%20a%20strike%20and%20of%20strikes%20yet%20to%20come

1906 was also the year that the Woman’s Social and Political Union stepped up their campaign for an extension of the vote to women.  And with hindsight we know that this peaceful scene will itself be changed dramatically by the Great War.*

But I want to finish by returning to the suffragettes, and in particular to Ada Chew, who chose not to chain herself to street railings, break the windows of politicians or end up in prison being forced fed.  She was not a suffragette, choosing instead to campaign within the labour movement for the vote.

Born in 1870, while working in a clothes factory in her 20s she was sacked for writing articles to the local newspaper criticising working conditions. From there she became active in the Independent Labour Party and in 1896 toured the north east of England in the Clarion Van arguing the case for socialism.

And during the next two decades continued to be active in the labour movement as an organiser for the Women’s Trade Union League and then from 1911 to 1914 for the National Union of Women’s Suffrage Societies. 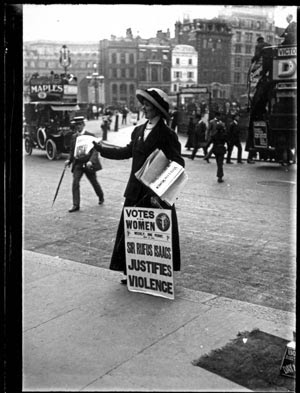 This was the body which the WSPU had broken with over the issue of militant action and of course it is the WSPU which often features in the history books.  But the National Union of Women’s Suffrage Societies was no mild debating group.  In 1912 it established the Elections Fighting Fund Committee (EFF) headed by Catherine Marshall which intervened in four by-elections campaigning for the Labour Party against Government candidates.  Labour had committed itself to opposing any franchaise bill which did not include votes for women and while the Party failed to win any of the four elections the Liberals lost two.

It would be nice to think that in that summer of 1906 some of the people captured on our photograph were already moved by the issue of votes for women.  Of course we will never know.

Pictures; the Athletic ground from the Lloyd collection and British suffragette with a poster, giving out newspapers from the Pankhurst Society web site http://www.thepankhurstcentre.org.uk/museum/suffragette-history

*stories of Chorlton during the Great War can be read at http://chorltonhistory.blogspot.co.uk/search/label/Chorlton%20and%20the%20Great%20War

Email ThisBlogThis!Share to TwitterShare to FacebookShare to Pinterest
Labels: Alternative histories, Chorlton in the 1900s, Votes for Women