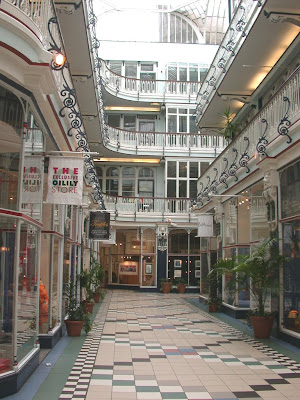 I think the first time I came across Barton Arcade must have been an accident. I guess it would have been in the early 1970s perhaps 1971 on one of those days when rather than sit in the library I had taken myself off to discover the city.

Even today it is easy to miss the place. If you walk along Deansgate the two entrances are set into the Barton Building, and even from the other side it is possible to fail to glance down the narrow alley between Exchange Street and St Ann’s Square. But if you do there it is in all its Victorian glory, wall of glass and iron four storeys high. 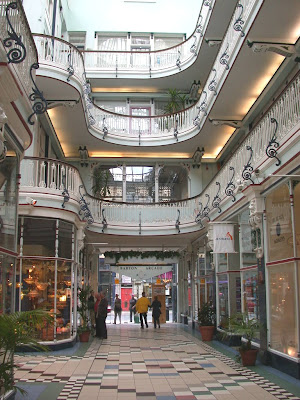 Now in the years I have known the place there has been quite a turnover in the shops on the ground floor, so the shop where we bought a settee became a lamp shop and has changed its use yet again, while what was once The Exclusive Oillly Store is a restaurant. I suppose it is the way of things. After all in the Arndale not far away retail businesses come and go.

Upstairs there are offices but I must confess I have only been up there once, looking for help for a broken camera, but sure enough there was some who could help. Of course once we had more arcades but they have all gone which is sad really because I can remember the rather rundown one in the old Corn Exchange which offered stuff that seemed unavailable elsewhere.

There are equally impressive ones. I always like going to the one in Leeds and was recently in The Galleria Vittorio Emanuele II in Milan but the Barton Arcade is special, perhaps because I always associate it with a very happy time in Manchester, or just because it is a nice place.

Email ThisBlogThis!Share to TwitterShare to FacebookShare to Pinterest
Labels: Manchester