When there were horses on Nell Lane 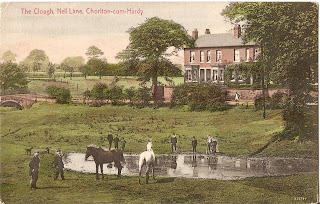 The picture perfectly captures that time when we were just slipping from a farming community into a suburb of Manchester.  It will be sometime around the turn of the last century and one of those rows of terraced houses for the “middling sort” is in place and behind it will be the smaller houses on the little roads running off Sandy Lane up towards Barlow Moor Road.

But the park has yet to be laid out and the old bridge across the Brook has yet to be replaced.  The horses may be from Hough End Hall which was just beyond the bridge as was Brookfield House, once the home of our doctor in the mid 19th century and now part of Chorlton Park.

There are a number of similar shots in the collection and it may well be that the same photographer on the same day spent part of a few hours recording a scene which would begin to vanish by the 1920s as the road was widened the park constructed and the pond drained.

Picture; from the Lloyd collection
Posted by Andrew Simpson at 04:30