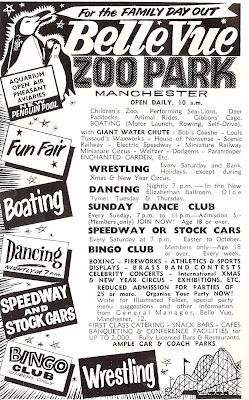 Now I have to be honest and say zoos like circuses do nothing for me.  But in an age before the internet and the telly for many people the zoo and circus were their introduction to exotic animals.  After all however nice a rabbit and next door’s cat were they exotic they weren’t

And here in Manchester there was always Bell Vue Zoological Gardens, which contained not just a zoo but also an amusement park and exhibition hall.  I am told that at its peak it occupied 165 acres and attracted over two million visitors.  And yes I was one of them, usually as a part of a school trip at the end of the summer term.  If memory serves me it must have been 1974 and perhaps 75.  I know it can be no later than 1977 because that was the year the zoo closed followed three years later by the amusement park.

So this advert from Leisure and Pleasure in the Open Air 1963 which I hasten to add was not a dubious publication brings back many memories.  Here laid out are all the attractions that Bell Vue had to offer.And Bell Vue had been pulling them in since 1836.

But during the 19th century  it was not the only such place.  "Closer to home were the Botanical Gardens on Chester Road and the Pomona Gardens at Cornbrook in Hulme.    The Botanical Gardens was a more gentle place, with what one observer described as “fine specimens of trees and shrubs in the extensive arboretum and plant houses and conservatories.... holding beautiful specimens of plants collected from around the world.”
Pomona Gardens was in contrast another of those boisterous gardens of fun.  Like Belle Vue it boasted a similar mix of attractions including “the magic bridge, Gymnasium, flying swings, bowling green, rifle shooting, romantic walks and a promenade for both adults and juveniles as well as boat trips on the Irwell.”


In the summer of 1850 it pulled out the stops with its “Splendid representation of the ERUPTION OF MOUNT VESUVIUS, as it occurred in 1849, the most terrific on record.”   Here was the “magnificent Bay of Naples, painted and erected by the celebrated artist Mr. A.F. Tait, and extends the whole length of the lake covering upwards of 20,000 yards of canvas and is one of the Largest ever Erected in England.”


These places truly played to the Victorian desire for self improvement with a dash of raucous fun.  So when in 1857 Manchester staged an Art Exhibition in the grounds of the Botanical Gardens it was a great success attracting great numbers of people.  Nor all of whom were from the more privileged sections of society.  Special excursion trains catering for working people were organised, with some travelling down from the north east.


Still the gardens were not cheap.  Bell Vue had originally charged a subscription ticket of 10s [50p] for a family and 5s [25p] for an individual while Pomona Gardens in the summer of 1850 demanded 1s [5p] for adults and 6d [2½p] for children.  These prices were beyond the reach of our labouring families and may have been a deliberate ploy to keep such places for the better off.  Sound commercial sense however won out and in the case of Bell Vue, the subscription tickets were abandoned in favour of a general admission price of 4d which later rose to 6d in 1851."*


Picture; from Leisure and Pleasure in the Open Air, Parks Committee Manchester Corporation 1963, courtesy of Linda Rigby
*From Chorlton-cum-Hardy A Society Transformed due out in September
http://chorltonhistory.blogspot.co.uk/search/label/A%20new%20book%20for%20Chorlton