Where was New Chorlton? Chorlton Eatery and stage 4 of the History Trail

There will few of us left who still think of old and new Chorlton.  And I have to confess that even though I am one of them I am a bit of a fraud.  For the distinction to have any real meaning you have to have been born before the last world war.

In my case it is just because I spend so much time crawling over the history of the township that I think of the two places.

Now any one venturing into the Chorlton Eatery, Copperfield or the Bar will be firmly in new Chorlton which is why Peter and I sited part of the History Trail in these three venues.

The trail tells the story of Chorlton over the last 170 years first around the green and Beech Road and then later north towards the four banks.  Peter has been working on painting Chorlton as it looks today while I have been writing about its history and that distinction between old and new.

So why new Chorlton?  Well if I told you that it would just give the game away and part of the fun is following the trail and getting some of the answers for yourself.  Of course we would always like to hear from you and you can post your comments on the blog or on the GLAD TO BE IN CHORLTON site on facebook.

Peter’s work is on display around Chorlton and can also be seen at https://www.facebook.com/paintingsfrompicturesand details of my book, Chorlton-cum-Hardy A Community Transformed which will be published in September can be found at
http://chorltonhistory.blogspot.co.uk/search/label/A%20new%20book%20for%20Chorlton 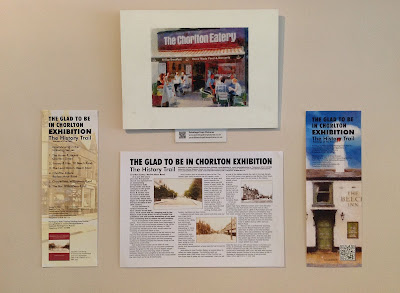 Email ThisBlogThis!Share to TwitterShare to FacebookShare to Pinterest
Labels: Chorlton artist Peter Topping in collaboration with Andrew Simpson, Glad to be in Chorlton