The Lead Station, stage three along the History Trail

Now if you have been following the History Trail, you will know that we sited our first two stories at the Horse & Jockey and Franny and Filer on Beech Road.

So those who fancy staying in the village can see stage three in the Lead Station which from 1885 was our own Chorlton police station.

We were some of the first guests through the door when Hilary and Patrick opened it back in the August of 1995, and have celebrated family events, my 60th birthday and plenty of impromptu meals ever since.  Only yesterday we called in for a  light lunch and the place was as busy as ever.

And today just 127 years after the Lancashire Constabulary opened shop, Nick de Sousa, the owner and Marc the manager have been keen to host the trail and celebrate its part in the history of the township.

Each of the venues along the trail tells a little bit of Chorlton’s story and we have also included something that is unique to each building.  So in the Lead, Peter who does the paintings has produced a special picture of the place and I have written about some of the policeman who worked and lived there with their families.

And you can read about Riding the Stang, but of course I don’t intend to tell you any more, for that you will just have to visit the Lead.  Now Peter and I would be very interested in what you think about the old custom which only died out in the 1840s.  So if you fancy expressing a view  post it on the comments section of the blog or on the GLAD TO BE IN CHORLTON site on facebook. 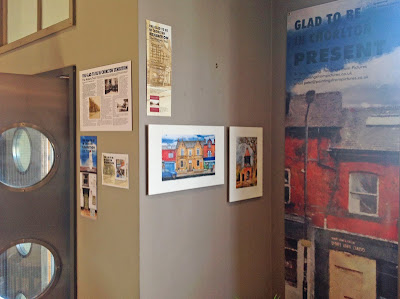 Peter’s work is on display around Chorlton and can also be seen at https://www.facebook.com/paintingsfrompictures and details of my book  Chorlton-cum-Hardy A Community  Transformed  published in September can be found at
http://chorltonhistory.blogspot.co.uk/search/label/A%20new%20book%20for%20Chorlton

Email ThisBlogThis!Share to TwitterShare to FacebookShare to Pinterest
Labels: Chorlton artist Peter Topping in collaboration with Andrew Simpson, Glad to be in Chorlton