Longford House and our own Chorlton radical 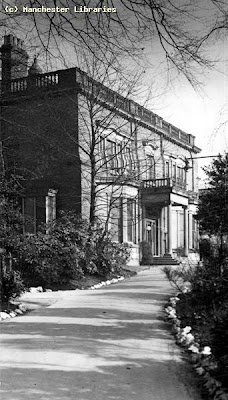 It is I have admit an odd view of Longford Hall which was built in 1857 and demolished in 1995, but I rather like it, and it does convey something of the grandeur of the old building which Pevsner in 1969 described Longford Hall “as the only surviving example of the Italianate style of architecture in the Manchester district.” *

The Hall was built by John and Enriqueta Rylands as a fitting home to a textile manufacturer who in 1888 employed 15,000 people in 17 mills and factories.**

Now this weekend will be the centenary of the park which became a public place in 1911 when the Rylands’ estate was sold off, but I want to reflect on the previous building and one of the families who lived there.

It was known as Longford House and had been the home of the Walker family, of which perhaps the most interesting was Thomas Walker, one time pillar of Manchester society but also a radical politician who campaigned for the abolition of the slave trade, supported the French Revolution and was indicted for treason in 1794.

The family lived at Barlow Hall from the late 18th century spending the summer there before moving back for the winter to their town house on South Parade which faces what is now Parsonage Gardens.  And it was there that a mob attacked Walker who was forced to drive them off by discharging a pistol in the December of 1792.

This was at the height of political debate over the issues of press freedom and the French Revolution.

“Emboldened by drink and fired on by agitators, groups hostile to the radicals began to gather around the city.  Walker was in no doubt that this was pre planned.  ‘Parties were collected in different public houses, and from thence paraded in the streets with a fiddler before them, and carrying board on which was painted with CHURCH and KING in large letters’


On four separate occasions a mob gathered outside South Parade, broke the windows and attempted to force their way in.  Supported by friends Thomas Walker was forced to fire into the air to disperse the crowds.  The magistrates did nothing to prevent the events and while a “regiment of dragoons was in town, booted and under arms”    and ready to disperse the rioters no order was given.  As if to add insult to injury the main concern of the magistrates when they finally met Walker was that he should not fire at the crowd again if the mob returned!  These attacks had been matched by similar ones on the home of Priestly in Birmingham and in Nottingham.”*** 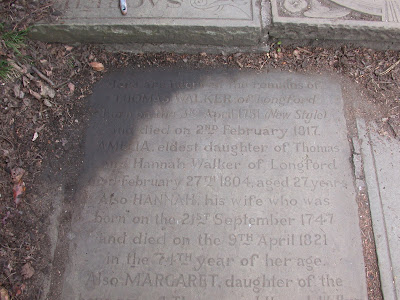 Walker survived both the attacks and was acquitted of treason, after which he retired to the new family home at Longford House where he died in February 1817 and was buried in the parish church on the green.

Pictures; Longford Hall, 1920, Courtesy of Manchester Libraries, Information and Archives, Manchester City Council, m67353, and the Walker family gravestone in the parish churchyard from the collection of Andrew Simpson.

* Pevsner N, The Buildings of England South Lancashire,
**  http://friendsoflongfordpark.org.uk/
*** from Chorlton-cum-Hardy A Community Transformed to be published in September http://chorltonhistory.blogspot.co.uk/search/label/A%20new%20book%20for%20Chorlton