Distant memories of Manchester parks ...... Piccadilly Gardens in 1963 and a Chorlton paddling pool around 1930 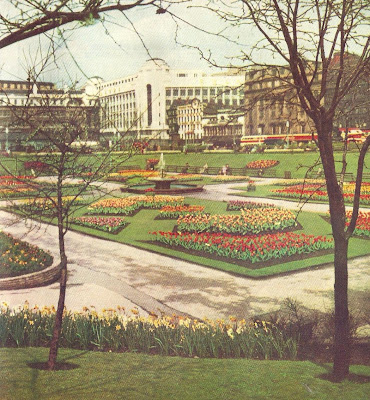 You have to be of a certain age to remember the old Piccadilly Gardens at their best, which of course means that I do.

There were few places in the city centre back in the late 60s and early 70s where you could go and spend the dinner hour on a warm and sometimes hot midday.

From just after twelve till about two in the afternoon, the park benches in the sunken gardens would be full of people.  Here could be found office workers on their dinner break, exhausted shoppers and during the school holidays a fair number of children with or without a parent.

And despite the traffic and the bus station the place was a pleasant haven of relative peace which from spring into autumn was a mass of flowers in those formal displays so loved by municipal gardeners.

I can still remember sitting with a girlfriend scanning the mid day edition of the Evening News for flats before rushing off to the telephone boxes which surrounded the gardens to make that all important call to the landlord.  Or just meeting up for something to eat in the sunshine and watching the pigeons, well aware that we only had a short time swap romantic banter.

So to the picture, which comes from a delightful little booklet issued by the Corporation in 1963 entitled Leisure and Pleasure in the Open Air, kindly lent to me by Linda Rigby.  I guess the picture dates from the 1960s but could so easily date from anytime from the 50s back to even before the last war.  Although here I have to be a little careful, because experience has taught me that there will be someone out there who can date the photograph by the bus in the background, the buildings around the gardens or even by the particular floral display.  So I will confine myself to a guess that it is early spring, for while the flowers are in their beds the leaves have yet to appear on the trees.

I reckon I am on firmer ground with the booklet.  It is a wonderful piece of history in its own right.  Here in its thirty or so pages are the details of each of the city’s parks and recreation grounds, from Wytenshawe, Heaton and Philips down to our Rec and even smaller patches of green.

Here to are details of the events being staged in the parks with everything from the big events like the Manchester Show down to “Jerko the Clown, Magic and Mirth in various parks during the week August 12th to 17th” and the costs of everything from pony rides to bowling.

All of which reminds you just how much went on in our parks a little under fifty years ago.  So as a tribute to that municipal provision I am going to share some of the delights on offer over the next few weeks, starting of course with the Rec and Chorlton Park.

“Beech Park, Beech Road, area 2.6 acres.  This small Park was acquired in 1904 and forms a pleasant open space with a bowling green, newly planted shrubberies and an open space for games.” 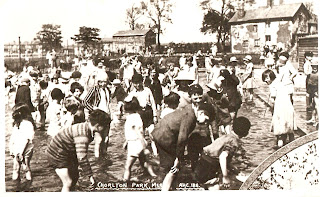 And on a hot summer’s day around 1930 a commercial photographer caught the paddling pond in full use.  It captures perfectly the sort of carefree day most of us remember from our own childhood and I wonder if such a simple activity would be repeated today.  The paddling pond was still there in the late 80s but has now gone.  So to has the barn in the centre of the picture which is a reminder that as late as the 1930s there was still much of the old rural Chorlton still around.

Pictures; Piccadilly Gardens from Leisure and Pleasure in the Open Air, Parks Committee, Manchester Corporation 1963, courtesy of Linda Rigby and the paddling pond from the Lloyd collection
Posted by Andrew Simpson at 04:00