It’s always nice to be recognised and yesterday The Furness Vale Local History Society http://furnesshistory.blogspot.co.uk/ told their members of my blog and I want to return the favour.
Furness Vale is a village in the High Peak between New Mills and Whalley Bridge. The society  hold an archive of documents, maps and photographs of the area and hold meetings on the first Tuesday of each month except July and August. A guest speaker usually presents an illustrated talk of local or regional interest. Membership is available at an annual fee of £5. For further information contact George Tomlinson 01663 742440. 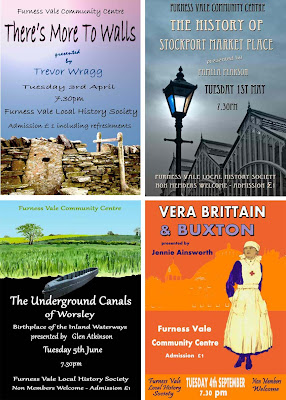 Now I know Furness Vale.  It is another of those places that canal, road and a railway come together.  The High Peak Canal which was begun in 1794, completed in 1805 and connected Ashton Under Lyne with Buxworth while the railway came through fifty or so years later.  I guess at that period it would have had a similar feel to it as our township. 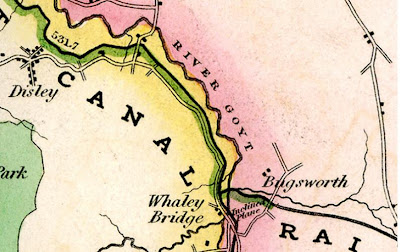 Pictures;  The recent and forthcoming programme of events of The Furness Vale Local History Society and detail from Bradshaw’s Canal maps 1830, courtesy of Digital Archives, http://www.digitalarchives.co.uk/