A little souvenir of the Great War

Now somewhere there will be the definitive book on the production of crested china during the Great War. 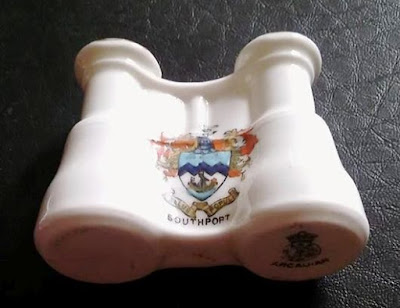 And before any one says anything I am well aware that in most books on the conflict crested china will not rate much more than a foot note.

But that is to ignore their importance for both morale and jobs during the period 1914-18.

Before the war the porcelain companies had turned out a host of different china figures many of which were linked to the seaside resorts and carried the coats of arms and names of the holiday towns.

And with the outbreak of war it just made economic sense to focus on war themes.

So there were tanks, ambulances, battleships and even a bull dog and recently I came across porcelain Red Cross Nurse.

Over the years I have written several stories showing off the variety that were on offer.*

When I first came across them I was intrigued that in the depths of a long grim war people should want to keep a reminder of the fighting.

But then if you had a son, husband, or sweet heart in the navy or on the Western Front driving a tank, the porcelain model of a battleship might be comforting.

And at a time when travel restrictions meant holidays were a thing of the past a souvenir porcelain ambulance at least kept someone in a job.

The surprise is just how many have survived the century.

Picture; from the collection of David Harrop

*Dusting down that china souvenir of the Great War.............. stories behind the book nu 4, https://chorltonhistory.blogspot.co.uk/2016/06/dusting-down-that-china-souvenir-of.html