On being ten with a hayloft as a playground

When you are ten, away from your friends and spending the long summer holiday with your grandparent’s time can hang heavy, especially as they had yet to own a TV. 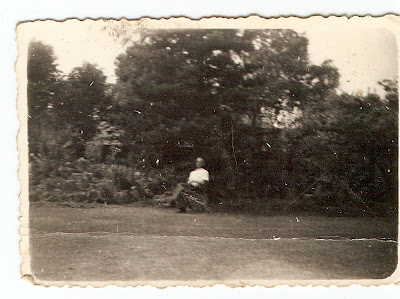 I remember endless hours spent playing beside the ornamental ponds imagining them to be a series of secret lakes which hid mysterious monsters. Or looking down into the apparently bottomless well in the greenhouse with the pungent odour of growing tomatoes and wondering who would rescue me if I fell in.

But these were as nothing compared to what greeted me in the hay loft above the barn at the bottom of the garden. There was still a powerful lingering smell of hay which combined with the heat from the slates and the fustiness of the crumbling mortar made this a place with a difference. If I was particularly daring I would open the loft hatch allowing fresh grass scented air to invade the room and look out across the fields. This was daring given the drop to the lane below seemed enormous.

On other days I just walked the country lanes, empty of everything but the occasional bird. There can be no greater sense of freedom than to be alone with just the hum from the telegraph wires and the blistering heat.

I don’t ever remember getting lost, but then I don’t suppose I ever went too far and never underestimate the homing powers of a ten year old who had not eaten since breakfast. Not that I remember many of the meals.

Our bread was baked at home on a huge black range. It was strong brown bread which granddad buttered before he cut a slice. The vegetables were also home grown and more than anything I remember her peas which Nana cooked using cloves which was fine until you ate one by mistake.

They had bought 170 and turned into bedsits with their living accommodation at the back of the house. I however got to stay in the front room and can still remember what seemed the long and scary walk from their kitchen. The candle I took with me cast small pools of dim light and I was never quite sure what lurked in the corners of the passageway. True there was some safety when I got to the light switch by the front room but then there was still a night of darkness to endure punctuated only by the headlamps of passing cars.

Despite my night time fears this was a good place to grow up, and a world away from how my grandparents had lived close to the centre of Derby. In their two up two down terraced house in Hope Street people lived on top of each other, knew each other’s secrets and were even aware when they visited the outside lavatories in the back yard.

Chellaston and in particular 170 Derby Road were different. Our neighbour kept pigs at the bottom of his garden, there were fields behind us, and everywhere there was grass, trees and open land. But I suppose these very things that had brought my grandparents to the village also brought others. They were in fact partly responsible having sold two of the three fields behind the house to a local builder who quickly filled them with houses.

The summer of 1961 was my last holiday there. I have to say the intervening years have wiped my childhood memories. The trolley bus terminus at Shelton Lock is fenced off and the disused weed infested canal has gone and 170 Derby Road is no more.

We were lucky to visit just before it was demolished. In its empty, abandoned and neglected state it seemed much smaller than I remembered. Nor did the garden seem to stretch forever while the stables had shrunk.
But I guess that is why we treasure those long ago memories belonging as they do to a time when the sun always shone, our grandparents were always cheerful and the worst that could befall a ten year old was a Sunday when it rained.