Nine years on from discovering my British Home Child ........ reflecting on the history

Now it is very easy to fall into the trap of simplified historical conclusions particularly when the event is a family one.

All of us with a Home Child will at some point have questioned the policy of migration.

Most come down against it citing the abuse, neglect and exploitation heaped on very young people, and criticise a policy which appears on the surface to be about shifting a problem of destitute and abandoned children to another country.

And for others the programme has been defended because it lifted a child from an uncertain and dangerous environment to a one of new opportunities.

Both have a degree of validity and both fall short of a balanced analysis.

There is no doubting that it was seen as a cheap and quick fit by many in authority who saw the savings in Work House relief and by others as a convenient way of dumping a perceived social problem elsewhere.

The fault was not so much the children or even the parents but a system which relied on cheap labour in our factories, ship yards and mines, was content not to interfere in regulating the awful conditions and then blamed the poor for their plight.

But that is to be unhistorical because while we can blame the system we have to be careful not to judge mid 19th century people by 21st century notions of state intervention.

Nor should we fall into the trap of just excusing their want of political action by citing the prevailing ideology of the period.

There were plenty during the entire 19th century who attacked the inequalities and offered up visions of the future based on social justice, and there were those at all levels that criticised the policy of migration from the 1870s.

These sat beside those with a genuine conviction that the open lands of Canada were a better bet than the overcrowded tenements and closed courts of our towns and cities where “poverty busied itself.”

And this was a period when many put their hopes of a better life in “the new country” and which fitted with that movement which criticised industrialization, argued for an emphasis on craft over factory production and saw real value in small rural communities.

All of which is another way of saying history is messy and leads me to start exploring the lives of those parents whose children became the migrated.

That is not to let the “system” or the political class of the 19th century off the hook.

It is  more to look at how these parents might have fared when our cities were accumulating great hoards of wealth.


Manchester was the “shock city of the Industrial Revolution.

Its population exploded during the early decades of the 19th century with whole areas given over to cheap housing, check by jowl with factories, mills and iron works. 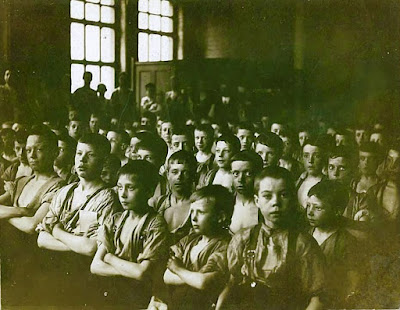 And into all this would have been born the children of the 1840's and 50's who in turn were the parents of the young people who were migrated.

So that is the series, having explored a bit of the world of the 1870's I want to move back three decades using the census returns, other official reports, along with the observations from the social commentators and where possible the voices of those who grew up between 1840 and 1860.

Email ThisBlogThis!Share to TwitterShare to FacebookShare to Pinterest
Labels: Born in the 1840s and 50s, British Home Children