Celebrating the history of the Lloyds ........... with that new book on Chorlton pubs and bars

Now there are lots of ways of making new friends and a book signing is not a bad one, especially if its a book about pubs and bars and takes place in a pub. 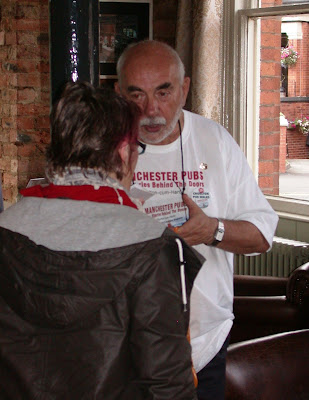 And yes this is another bit of outrageous self promotion.  The book in question is the second in the series on Manchester Pubs The Stories Behind the Doors and focuses on the 33 pubs and bars of Chorlton.

Less a guide, it is a celebration of the history of these drinking places and sets them into the bigger story of how Chorlton was transformed from a small rural community to a suburb of Manchester.

Each has an original Peter painting and there are lots of old and contemporary photographs, along with maps and much more.

Added to which the research revealed some interesting new information about many of the 33.

And that takes ne nicely to the Lloyds which was the first of our new pubs.

It was built to appeal to the new wave of residents who were moving into Chorlton from the late 1870s, who didn’t fancy sitting in the old traditional beer houses rubbing shoulders with agricultural labourers and base tradesmen. 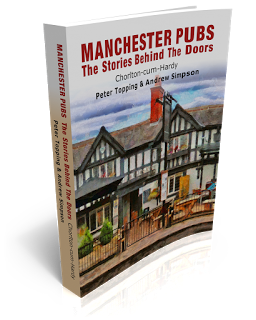 Instead they wanted something grander and the Lloyds offered just such a place.

I have always followed the received historical knowledge which dates the pub to 1870, but in the course of the research discovered it had been granted a license two years earlier, and while it may have been originally associated with Mr Lloyd and Platt in 1873 was bought Mr William Roberts who already owned the Bowling Green.

And for the rest as they say “you will have to buy the book”, which neatly and with very little in the way of contrivance, takes me to the book signing last Saturday.

It was the first of a number which we will roll out over the next year along with a series of historic walks planned for September.

Such events are always great fun, partly because we get to meet old friends, and make new ones. 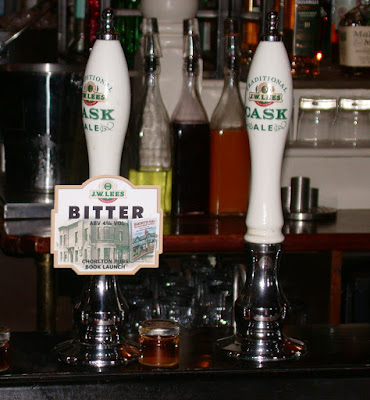 In my case it also included meeting up with Derek and Brian who I have shared many facebook conversations on topics as varied as Chorlton football teams in the 1950, Woolwich market and a remarkable set of open air concerts in Eltham Brian that I both attended in 1966.

And while I was thus engaged Peter was indulging in a series of discussuins with customers and pointing them to his new ideas for a beer which perhaps one day the Lloyds might adopt.

Our thanks must also go to Darren and the staff of the Lloyds who made us most welcome.

And Vicky from Chorlton Bookshop who did the business of selling the book while Peter and I met lots of people.

So that is all I want to say except that you can  get the book from Chorlton Bookshop. 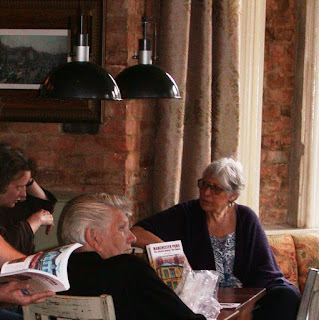 
Pictures; The Lloyds, June 3 2107 from the collection of Andrew Simpson

*A new book on the pubs and bars of Chorlton, https://chorltonhistory.blogspot.co.uk/search/label/A%20new%20book%20on%20Chorlton%20Pubs%20and%20bars

Email ThisBlogThis!Share to TwitterShare to FacebookShare to Pinterest
Labels: A new book on the pubs and bars of Chorlton, Chorlton artist Peter Topping in collaboration with Andrew Simpson, Chorlton pubs, Chorlton pubs and hotels, The Lloyds' Hotel