Just how do you mark the sacrifice of the Great War?

It is and was of course a question of great importance given the sacrifice in lives, the loss in treasure and the total disruption to millions of people.

The porcelain companies were quick to respond to what would clearly be a big market and began making small china memorials, each with a different badge or coat of arms for towns and cities across the UK.

It is a story I keep coming back to.*

It was only an extension of the items that they had been selling since the start of the war and replaced peace time models which had focused on thatched cottages, Blackpool Tower and countless other “souvenirs of a seaside holiday.”

The new range used tanks, ambulances and battleships and with the conclusion of the fighting they turned to memorials, like this one for Matlock Bath.

I am always surprised that after a century so many have survived.

They are after all made of china, which can be chipped or worst still dropped and smashed.

And after the war some will have been relegated to cupboards or the space under the stairs only to be thrown away with the onset of another world war or the death of the owner. 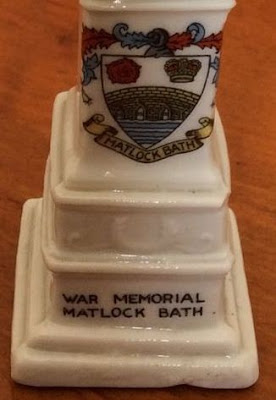 But there are still enough to give traders a lucrative business..

I had thought that this one might well have been just a standard piece made distinct by the addition of the Matlock transfer, but not so, it is based on the actual memorial in Matlock Bath at 44 N Parade, Matlock Bath, Matlock DE4 3NS, and records the 22 men from the Great War and the 10 from the Second World who died.