I doubt we will ever know who these four people are and even getting a date will be next to impossible.

But there is a chance that we can identify the hospital and that will offer up a staff list and if we are very lucky there may be other pictures which contain the names of some of the nurses and by a process of elimination we get closer to knowing who the two young women were.

In the same way there is that remote possibility that someone has a cherished picture of one of the soldiers which also carries the location of where they were recovering.

None of which is likely I know given that even the hospital remains elusive.

But there is a clue and it is there on the notice above the bed and refers to the employees of H.Potter and Co who “supported” the bed. 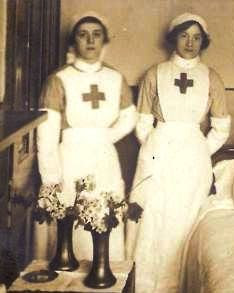 The company made baby linen and were located on Moss Lane East on the corner with Cross cliffe Street but as yet I don’t know how large the company was or the size of its work force its but on 1914 they contributed to the war effort by helping fund the local Red Cross hospital.

Now there were more than a few voluntary hospitals close by including three in Whalley Range, and more in Rusholme and Fallowfield.

All could be a likely candidate but I am pretty sure that our hospital was just along Moss Lane East at Willow Bank.

Sadly I haven’t been able to track a photograph but it was there by 1841 and appears on a series of OS maps through the 19th century and consisted of a terrace of four fine houses in extensive grounds facing north.

The properties are still there today located between Upper Lloyd Street and Monton Street and while they have long ago lost their impressive gardens they still have a hint of their past grandeur.

I can’t be sure whether just one or all four became a hospital Willow Bank was important enough to have featured in a series of picture postcards.

This one was marketed by Wilfred O Davenport who had a photographic business at 76 Claremont Road and he may well have been responsible for another 13 which can be seen in Manchester’s local image collection.*

They all show groups of nurses posing beside soldiers some of who are in bed while others in their “hospital blues” sat beside them.

I have no doubt that Mr Davenport saw the commercial possibilities of a series of postcards which would not only excite local interest but would be bought by those recovering in the hospital and by visitors.

And that brings me back to the notice above the bed which offered up the clue to Willow Bank and in turn sheds light on how far communities supported their local hospitals which came in the form of donations, voluntary help and a shed load of organised entertainments from musical nights to Christmas parties.

The East Lancashire branch of the Red Cross published an account in 1916 of the work of hospitals in the Greater Manchester area including the names of volunteers, the work they undertook and the financial support each community provided.

In the fullness of time I should be able to read the entry for Willow Bank but for the time being I can begin to track the employees and individuals who helped.

So along with the employees of H Potter there were those of Gibson’s on Erskine Street and individuals like
Mr Rowe and Miss Hunter and even one bed named after a street.

This was “the Meadow Street Bed”   It is the only notice in the collection of its sort and offers up the possibility that the bed had been funded by the residents.
Meadow Street ran from Moss Lane West to Graeme Street and consisted of 163 households and businesses that may well have come together and raised the funding by street collections and other events. 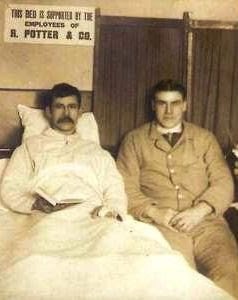 I doubt that we will ever know for sure and like the identity of the four young people in the postcard it will be a bit of history for ever lost to use.

But at least we have managed to discover their hospital and for that I have my old friend David Harrop to thank for buying the picture and offering me the use of it.

It didn’t come cheap but it is a fine addition to his collection of memorabilia from both world wars and underlines the importance of that collection because David is not content to collect and squirrel away his purchases.

Instead many are on display either at the permanent exhibition in the Remembrance Lodge at Southern Cemetery or on short term loan to museums and art galleries.

More recently some were on show at the Yanks Week in the summer and a selection formed part of a talk at St John’s Parish Church in Heaton Mersey.

But David is looking for a bigger venue to exhibit the collection and I have to say that this would be a wonderful opportunity for a lot more people to gain a greater understanding of the those two world wars and their impact on those who lived through them.

And that brings me back to the postcard which I am pleased he bought because it has set me off a journey of research which may just end up with getting to know more about the four staring back at me.