A book I never tire of ..... The Book of Jewish Cooking

Now I like cook books, because like history books, they can be read for what they offer, but also with the passage of time,  throw a light of how we used to eat. 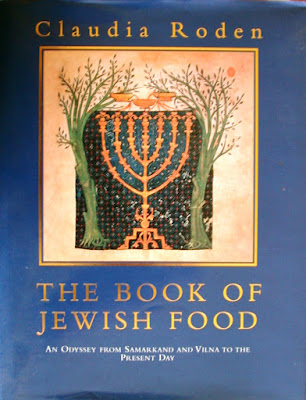 So back in the late 1940s, the Ministry of Food produced a series of leaflets which could be collected as a book on how to cope with rationing, providing recipes, some of which were traditional and others adapted to the shortages of food.

The rationale was in part the obvious one, but also that the war had disrupted the traditional pattern of cooking, with some children spending time away from the home when they might have learned basic cooking skills and also because wartime production had forced many people in to factory canteens, restaurants and feeding centres.

It is an area which has fascinated me and my friend Lois, who both have written about cook books in our blogs.*

And today I want to go back to an old favourite which is The Book of Jewish Cooking by Claudia Roden.

I first came across her work when I bought Mediterranean Cookery, and became an instant fan, and from there  I progressed to The Food of Italy, and then The Book of Jewish Cooking.

What they all have in common, is a clear and simple style which adds history and geography to the recipes.

And of these her book on Jewish Cooking is a fine example, offering an introduction to the food and the traditions, and then dividing up into sections on the Ashkenazi World and the Sephardi World, both of which are crammed with history and recipies.

So there you have it.