Now I thought I would end the short run of steam powered road vehicles, with this painting by Peter Topping of a “Traction Engine in Tatton Park” in 2012. 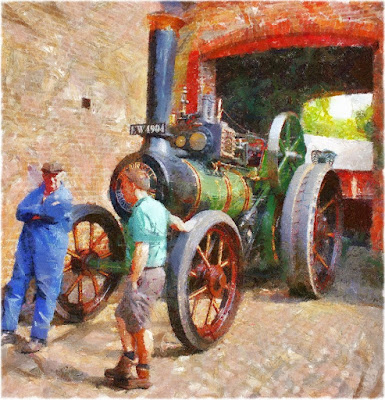 The series to date has featured black and white images of a collection of steam vehicles I came across in the early 1980s.

I was into black and white  photography at the time, and the the medium did the subjects proud.

But all the vehicles had once left the works in bright coloured livery, and of course the black and white pictures did them no justice.

So to end the short series, here is Peter’s painting which brings to life all that was fun about the age of steam.

Of course the machines could be dirty and depending on your point of view could seem smelly.

But not for me and I suspect not for many others who grew up in the last stages of steam when it pulled our trains,delivered heavy goods and kept the machines working in the factories.

I have never lost that sense of romance and excitement at seeing a steam powered engine. 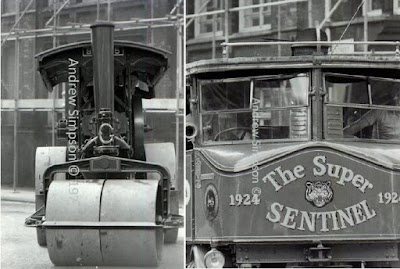 They were, and still are magic, although Mother always complained about the steam locomotives which passed the bottom of our garden and seem to have saved a cloud of dust, dirt and warm cinders for the moment she hung out the clean washing.

Added to which steam power was always hard work, whether it was shovelling the coal while travelling at high speed on an express train or maintaining all the moving parts of a steam roller.

All of which, as ever, makes history very messy.

Pictures; steam vehicles, 1980 from the collection of Andrew Simpson