On being a British descendant of a British Home Child

Now, at the outset this is not to drive a wedge between me or all my Canadian friends who also have descendants of children migrated to Canada, and later to other parts of the Commonwealth and for that matter our Canadian family. 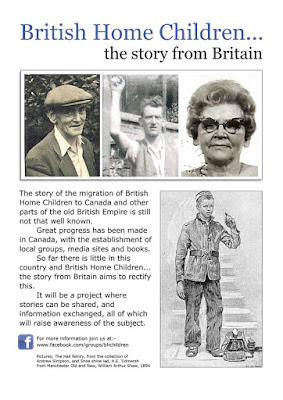 It is more picking up on the suggestion of Jacky Cooper that we should also take a few minutes out to tell people about the extraordinary story of British Home Children and along the way post our stories on social media.

I first came across my BHC by accident as many of us do while researching our family history.  From there I began piecing together the bigger picture which by degree got me to Canada, and a set of friendships with Canadian BHC descendants.

What all of us have in common is a desire not only to explore the BHC story, but to make it more well known.

During the last ten years I have seen BHC develop into a serious area of historical study, with a growing number of social media sites and associations across Canada.

And having done my bit with the blog, and talks I decided earlier this year that it was time for a facebook site based here in Britain with the aim of promoting the story and raising awareness in Britain.  Very early on Tricia Leslie joined as a fellow admin and she has been tireless in making the site work.

Which brings me back to Jacky who posted, “September 28 has been designated British Home Children day in Canada, and the groups there are planning events to mark the day.

Like other members in the UK I've been invited to a couple of these, and had to decline (Just too much of a commute, though I'd love to go!) wouldn't it be great if this group could do something to mark the day, too?

I'm pretty sure it's too late to start planning an actual event, but it would surely raise awareness of the children if, for example we each shared a post about 'our' BHCs. It would be easy to organise, and if we put the post on our own timeline as well as here, then all of our friends would get to read at least one personal story about a BHC.

If we get some group participation, and folk think it's worthwhile, maybe we could even think about planning a small event of our own next year?”

So this is my story, with a suggestion that we all begin to think about that event next year. 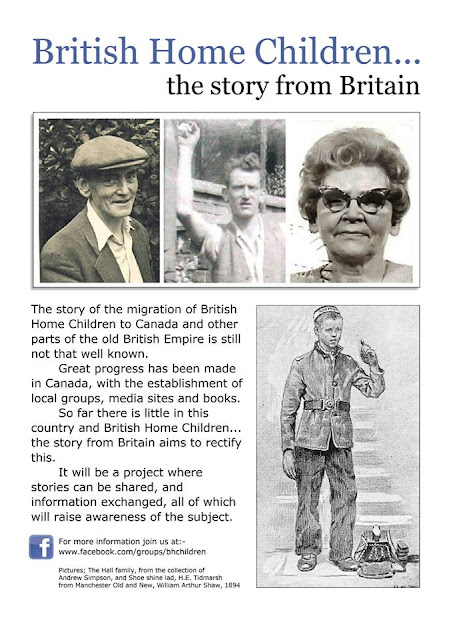 Perhaps, something in Liverpool which saw so many young people start the journey across the Atlantic?

In the meantime I will dust down my old 2008 power point and put it up to be shared and suggest people down load the poster at the top of the site, and distribute to friends.

Poster; siblings of our family BHC, designed by Peter Topping, 2018