Now a little bit of the Chorlton Blitz is on display outside the Post Office.

I say the Chorlton Blitz but the destruction that fell from the sky just before Christmas 1940 was part of the bigger aerial bombardment which has become known as the Manchester Blitz.

On the night of December 24th and into the early morning of December 25th 1940 thirty people died in Chorlton.

They were all victims of the second night of the Manchester Blitz in which an estimated 644 people were killed and another 2,000 injured.

Of the 30 who died here many came from just two roads while the rest were spread out across the township.  Most of the bodies were taken to Withington Hospital, a few to Embden Street mortuary and a few to the Cavendish Road [now Corkland Road] mortuary.

And I suppose it was the fact that the mortuary on Cavendish Road was just round the corner explains why Mr and Mrs Carr were taken there. 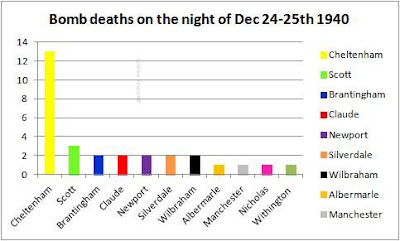 They lived at 549a Wilbraham Road* which took a direct hit from a high explosive bomb.

Their home and two others which stood on the site of the modern post office were destroyed.

Earlier in the century 549a had been one  of three houses which were originally numbered, 3, 5 & 7 Wilbraham Road.

They had been built sometime after 1885 and were typical of the new sort of properties that were being built to meet the influx of people to Chorlton.

Many of these were professionals; a few owned their own businesses and a lot more worked in the offices and big shops of Manchester.  They were attracted here by a train service which could whisk them into the heart of the city in under 15 minutes and the fields, farms and open country which for many was even closer.

So along with a surgeon and his family at number 1 the remaining three were the home at various times to a retired cotton merchant, a widow “living on her own means”, Edward Ireland who had  a number of photographic studios in Manchester, and a doctor, dentist and a oil trader.

And the size of the houses reflected the inhabitants.  Number 1 had twelve rooms, 3 and 5 eight rooms and number 7 9 rooms.

Each had cellars, a decent front garden and a longer one at the back stretching down across what is now the sorting office and yard.

But like other stretches of property in this new part of Chorlton they were soon developed with the addition of shop fronts and perhaps with an eye to even greater profits the owners sub divided the shops.

In 1911 at number 3a there was Harvey Goodwin, confectioner, at number 3 Mrs Ethel May, cycle dealer, while at 5a Stuart Gray ran a tobacconist and in number 5 C. &W. Copping advertised themselves as china merchants.

The last of our three had become the post office in 1901 and remained so until the night of December 24th.

And now as work is underway to extend the Pots Office Cafe, some of the bricks, pipes and other bits of the three properties are there to see again seventy eight years after those bombs fell.

Pictures; the excavation outside the Post Office, 2018, the properties circa 1891 from the Lloyd Collection, and casualties adapted from official reports on those who died

Email ThisBlogThis!Share to TwitterShare to FacebookShare to Pinterest
Labels: Chorlton and the Second World War, Chorlton in the 1940s, The Manchester Blitz