The Czech motorbike, a cow shed and the Beast from the East

Now, I know nothing about motorbikes but I know a story when it trips you up, and today that is what I got. 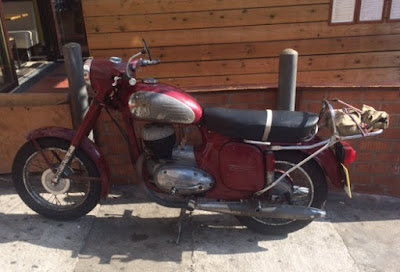 We were by Ken Foster’s Cycle shop waiting for a bus, and outside was Sean carefully tending a motorbike.

To my inexperienced eye it looked old, and was in fact built in 1974 in the Czech Republic.

So much so, that one side of the bike was covered in a mix of smelly cow stuff and needed some tender care and attention from Sean to restore it to when it rolled off the production line. 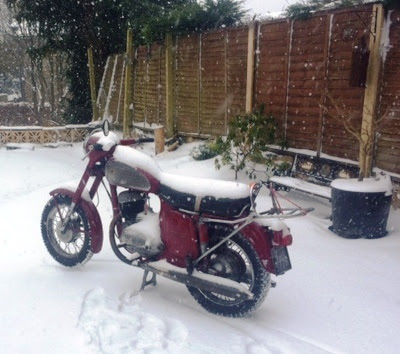 But enough of this technical jargon, and back to Sean who might have called it the Beast from the East, given that when the storm struck the bike was in his garden and was covered in snow.  Undeterred Sean told me
“It started with a second kick once I took the snow off” and despite its links with the East, he prefers to call it “the Cow Shed Special” adding “I regularly commute from Rawtenstall to Chorlton and have ridden it to Holland and back in 2017 to a Jawa Classic Rally”.

So a little bit of Czech history can be seen here in Chorlton and on the twisty roads which brings Sean from Rawtenstall.

And that is about it, leaving me only to thank Sean for providing the pictures and the story.
Location; Chorlton, the Czech Republic and Rawtenstall