Now, I always knew there would be more to find out about Pooley’s Buildings which stand at the end of Princess Street, just off Chester Road.

They date from 1820 and still have an elegance about them which is nothing to how they would have appeared when new.

Back then the houses looked out on a large open area boarded by trees, and were set in two large gardens which ran down to the Corn Brook with Corn Brook Park situtated directly behind.

This is the third of the stories on the properties, and yesterday I reflected on how little I knew of their owner who was Mr John Pooley.

So I am indebted to Derek Watts who uncovered a heap of information on Mr Pooley’s business interests.  I knew that he had a portfolio of properties bit in the city centre and on Hulme and had come across a reference to a cotton factories run by the Pooley’s.

But Derek unearthed a short pieced from that excellent site, Grace’s Guide to British Industrial History, which referred to the textile business of the John Pooley.*

In 1798 Boulton and Watt supplied the Mr Pooley and his partner with a”sun and planet beam stem engine of which the original drawings can still be seen.

The company prospered only to go bankrupt in 1827, leading to the sale of the mill’s machinery the following year.

Despite these troubles Mr Pooley retained his property empire, which brings us back to his grand buildings on Princess Street.*

I found some of the residents in the 1851 census, and just assumed the houses stayed residential properties, but not so, according to Adam Brock they had a very different story, which was that they became, “the officers mess for a large part of the 19th century before being made into a soldiers retirement home in the early 20th. I have seen photos of old soldiers sitting in the covered area. I'm recalling from memory, so apologies for not being able to provide more detail.

Its lovely building, royalty visiting the barracks dined here. I actually have a relation who rented a flat in the building”.

All of which intrigued me and as you do I went looking for the cross over point which seems to have been 1868.

In that year Mr Pooley is still listed in the Rate Books as owning them, but from 1869, they appear to belong to others**, and in 1876 they are listed as “Army HQ Offices Northern Division, and in 1911 are referred to as Cavalry Barracks,  Major W W Scott Commander Army Service Corps".**
As such they will have been connected to the Cavalry Barracks which was located close by.

After 1911, there is at present a blank but I doubt that it will remain so for long.
For now I will just conclude with a short extract from Grace’s Guide which uses the 1849 OS map to point out that “the [Pooley] mill was located on the edge of the Manchester conurbation. A few hundred yards to the west were fields and parkland. Immediately south of the mill were large cavalry barracks.

The mill was fairly large, and had evidently developed in stages (the map shows two separate boiler houses and two separate engine houses). There was a large reservoir in the grounds (approx. 50 yards by 40), and also a smaller reservoir. The grounds also included gardens and two rows of houses, known as Pooley's Buildings.

The whole site appears to be enclosed by walls. 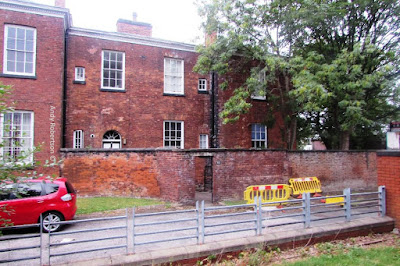 To the south west of the mill is a very large house overlooking Cornbrook Park, identifed as 'Pooley's Houses'.

The Corn Brook passed through the park. A path through the gardens behind the houses led to the mill, passing under King Street by a tunnel. King Street would hardly be a busy thoroughfare, as it only served the barracks, so presumably the tunnel met Messrs Pooley's needs for security and privacy".