The mystery of the War Department Arrows on Pooley’s Houses 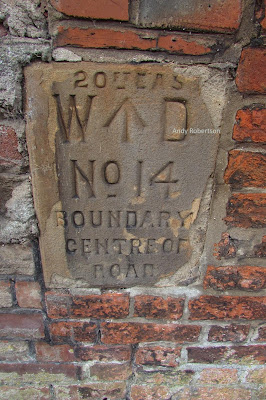 It is on Princess Street where it meets Chester Road and he has sent me a few pictures he took recently, along with an extract from the OS map of 1849 which shows the building dominating the surrounding area.

In time I will go looking for its history but for now it is the two stone blocks inserted into the wall of the property which fascinates Andy.

He told me, “showed Cathy Pooley's Houses the other day on the way back to Chorlton and she noticed these two stones in the wall about ten yards apart.

Cathy researched them and discovered they are War Department Broad Arrows used from about 1855.

I am not sure if they are in their original positions.

It seems unlikely given the differing stages of erosion, assuming both stones are of the same age. 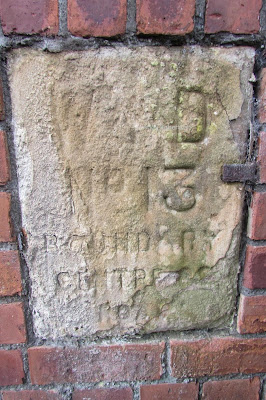 Only the northern half of Pooleys Houses from the 1849 map survives today”.

So there you have it a mystery begging for an answer.

There will be some one out there who takes up the challenge and recount the history of the two stones, perhaps also suggesting why No 13 and 14 should be so close together.

And that leads to that other question of why one should be so weather beaten and the other almost pristine in its appearance.

Like Any I profess total ignorance and am looking forward to the supporting posts.

These may also shed light on Pooley's Houses, which are equally intriguing.. 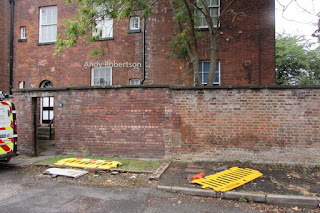 Tomorrow; Mr Jonathan Pooley, his houses and some who lived there

Pictures; Pooley’s Houses,  and those inscriptions, 2018 from the collection of Andy Robertson
Posted by Andrew Simpson at 03:00