Now I have Catherine to thank for this news clipping which she sent over this morning.

It comes from page 2 of the Manchester Evening News and dates from 1976 and she added, “Hi Andrew, check this news clipping out. Top right hand corner is Valentines, now McDonalds. All the M/C clubs are there from the 70’s”.

And so they are, from our own Valentines, to a heap in the city centre and out across Greater Manchester.

The names evoke the memories, and there will be plenty who smile at the reference to the Golden garter in Wythenshawe, Carriages in Droylsden, and Poco in Stockport.

I can’t claim to have been to them all, but Placemate and Fagin’s were regular haunts and more than once I fell through the doors of Bier Keller in Piccadilly.

For those of us who live in Chorlton, Valentines will always be a special place, and remained so despite its many name changes until as Catherine said it was demolished to become a fast food outlet.

More than that there will be plenty who remember its earlier incarnation as a ballroom and perhaps when it was briefly a venue for roller skating. 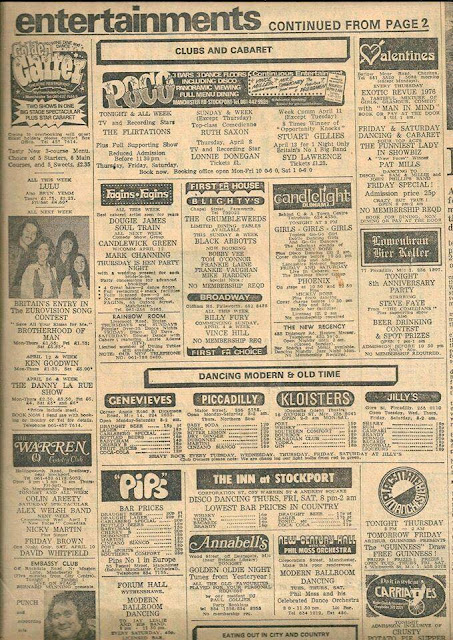 On a more general but still historic note, what I draw from the page is the sheer number of top acts which were attracted to our clubs, from Frankie Vaughan and Frankie Laine, to Vince Hill, Billy Fury and Mike Harding.

Some of the names will have faded with the years, but a close look at other listings for other years will reveal that Shirley Bassey, Sammy Davies Junior and a host of top celebrities played our clubs.

But these were just the popular ones that advertised regularly.

Add to these those smaller and sometimes seedier places tucked away down a back street, off a less well known road, in a more shabby part of the city.

These could also come up trumps with a mix of local bands, playing live music for little more than the price of a pint.

And that is where I will leave it, with just a thank you to Catherine and a second visit to Placemate on Whitworth Street, which I discovered sometime around 1976 or slightly earlier.

Exactly when is now lost in a haze and places me just outside the true clubbers who will remember it as the venue for the Twisted Wheel, but that along with the stories from Jennie who smuggled her clubbing clothes past her parents and offered the excuse that she was staying over at a friend's is a tale for another time.

Location; across Greater Manchester in 1976

Email ThisBlogThis!Share to TwitterShare to FacebookShare to Pinterest
Labels: Manchester in the 1970s