Now after some hard work we will soon have a plaque on a wall here in Chorlton to honour Madge Addy. 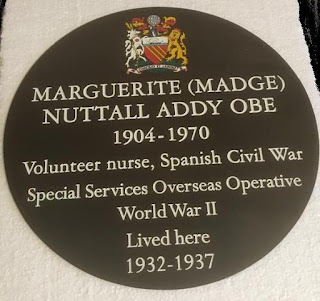 She was a remarkable woman who not only went out to Spain during the Spanish Civil War but went on to serve as an agent in occupied France.*

It is a story I have been uncovering for a while and was prompted by a request from Cll Shelia Newman to research the life of Madge Addy who lived in Chorlton.

Interest has grown in Ms Addy since Chris Hall suggested that there should be a memorial plaque to this brave woman and there may be some who also have knowledge of Madge please contact Chris by email at christoff_hall@yahoo.com or on 0161 861 7448.

And now the plaque is ready and will soon be installed.

Email ThisBlogThis!Share to TwitterShare to FacebookShare to Pinterest
Labels: Chorlton women, Madge Addy, One to do