On coming across my book on the shelves of Eltham Library

Now I am fascinated by the Eltham of the 1840s, so much so that most nights I fall asleep walking its lanes and field boundries. 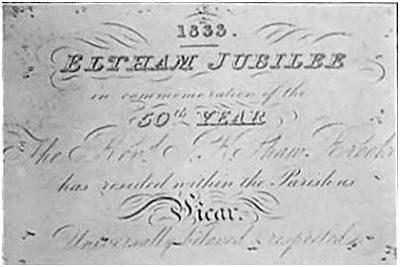 Added to which over the years I have come to know many of the people who lived and worked there.

These include the blacksmiths who hammered and heated by the High Street.

Or Peter Wakeman an agricultural labourer who decorated his invitation to the “1833. Eltham Jubilee, in commemoration of the 50th year the Rev. J.K. Shaw Brooke has resided within the parish as Vicar, universally beloved and respected” and was nvited by name “... to partake on Thursday , the 5th day of September, of a dinner provided by public subscription in token of the respect and regard entertained the Vicar of the Parish Of Eltham, 1833."

And Mr Richard White who taught at the National School on Pound Place in 1841, and lived on the same street.

It is the sort of history I enjoy and comes from wanting to know about the lives behind the cottage doors. 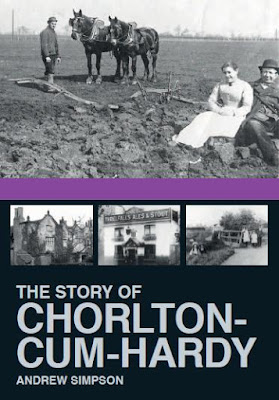 This was pretty much why I started writing about the village I now live in which was a small rural community much like Eltham but without as many posh houses and like Eltham would in time become a suburb of its neighbouring city.

The Story of Chorlton-cum-Hardy was a snapshot of life during the first fifty years of the 19th century covering everything from domestic life, to work, play and the scandals of the village including two murders, two infanticides and a rates rebellion.

Now what I did not expect was to discover that it is now on the bookshelves of Eltham Library which pleases me not only because much of what is written in it could be applied to the area but for some very personal reasons.

I grew up in Well Hall and look back on those years with great fondness and owe much to my years at Crown Woods, my sister Stella worked at the library and finally I like to think my mother would have been pleased given that she too  wrote stories and plays and was working on a book before she died.

So before this slides into a piece of outrageous self promotion I would just like to thank who ever ordered up the book allowing a little bit of me to sit in the library I liked so much.

Email ThisBlogThis!Share to TwitterShare to FacebookShare to Pinterest
Labels: Eltham, Eltham in the 1840s, Well Hall, Well Hall in the 1840s