On Edge Lane, sometime before 1987 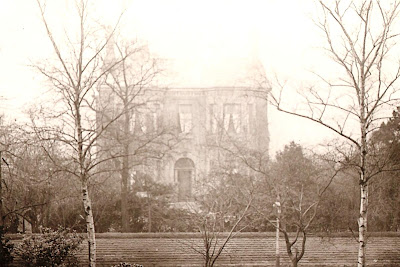 Sometimes you just have to accept defeat.  Not that it happens often, but on occasion all attempts to probe the secrets of a picture come to nothing.

And so it is with this house.  The caption just says demolished in 1987, and that is all you get.

Now it is in a section of the collection devoted to Edge Lane so we are sort of a little way forward but that is as far as it goes.

The annoying thing is I should know the place having walked up and down Edge Lane in the decade before it was pulled down, but it stubbornly sits at the back of my mind and I cannot place it.

And as you do I have scanned Edge Lane for any clues to where it may have been.  There are a few spots where there is new build which might date from the late 1980s or 90s but I can’t be sure.  Nor are the OS maps much help. Both the 1907 and 1935 maps deliver up a number of candidates but that is all they are.

I can narrow the hunt a little because it has to be a detached house set only a little way from the road but that still leaves a few to choose from.

If I had to be more precise I think it may be the Chorlton end of Edge Lane perhaps the stretch from the Church to the junction with Wilbraham Road, and possible a little past Kingshill Road.

But it’s all a bit too vague and there remain too many variables, so I shall conclude by repeating one of those frequent observations that often “you don’t know what you’ve got till it’s gone.”

Picture; from the Lloyd collection
Posted by Andrew Simpson at 03:30