Now there will be a story about each of the stops on Manchester’s Metrolink, it’s just that I haven’t discovered them yet. 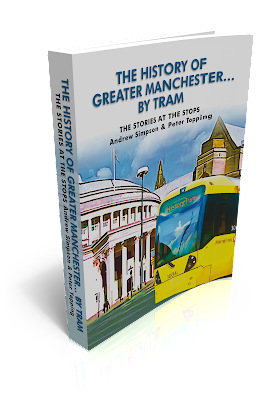 And as there are currently 93 stops, with another six planned for the extension to Trafford Centre, that means a lot of stories.

Nor will that be it, because there are also proposals to include links to Bolton, Wigan and Stockport.

So for those that take the tram and travel across its existing 57 miles of track with a daily option of ending up at the Airport, Eccles, Ashton, or Rochdale there is a chance of lots of stories.

Mine is less one tale and more a collection which always begin when a new line opens.

I will be there on day one, usually in the late morning ready to travel the track, and it is surprising how many others will be doing the same.


Usually they are retired, carry a camera, and some will be using their phone or one of those old cassette recorders to capture the noise and the destination announcements.

Eric always sits at the front directly to the right of the driver and will tell anyone silly enough to sit beside him, the entire history of the Metrolink, with accompanying facts about everything from the old railway stations which the tram passes through, to the earlier blue trams, which started the service off in 1992.

And now you too can be part of Eric’s journey.

Peter and I have decided on a new project from which will come the new book later in the year.

Following on the recent publication of The Quirks of Chorlton-cum-Hardy* we are starting on The History Of Manchester  ...... By Tram -The Stories At the Stops.

It will consist of 99 stories, with original paintings from Peter, and a mix of old and new photographs, which will explore the history of Greater Manchester and celebrate the places and people along the 57 miles of tramway.

And here there is the opportunity for everyone to share their story of their stop, along with the treasured snap of Aunty Renee waiting on the platform of Chorlton Railway Station, for the 4.10 from Central, or the outing Beryl and her pals took to Bury Market from Altrincham, changing at St Peter’s Square for Victoria and on to the Bury Interchange.

We only ask that any picture you share is yours, and not taken from the internet.

As for the tales of trips, they can be anything from the day you lost granddad's shopping and false teeth at Central Park to the surprise celebratory who asked for your autograph by Media City.

To help those who are unsure of which stop to choose, and to frame the challenge, here is a chart of all the stops from Manchester’s 42, down to Bury’s 6 and the Salford 10.

Of course I could have named them all but where is the challenge in that?

You can send in your stories by adding a comment on the blog or as a message to facebook or pubsbook site. 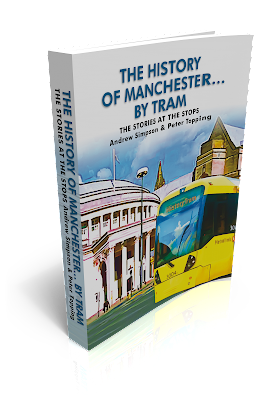 And for those who collect the publishing mistakes of the world, here is the original cover of the book which failed to mention Ashton, Altrincham, Bury, Oldham, Salford or Rochdale.

But quick as a flash we corrected the error leaving this original book cover making ita bit of a collector's item.

Pictures; cover of The History Of Geater Manchester  ...... By Tram-The Stories At the Stops, artwork Peter topping, 2017, At Victoria with the Second City Crossing, 2016 and Bury Market, 2014 from the collection of Andrew Simpson


*The Quirks of Chorlton-cum-Hardy, was published on November 16 and is available from Chorlton Book Shop or from http://www.pubbooks.co.uk/ or 07521557888

Email ThisBlogThis!Share to TwitterShare to FacebookShare to Pinterest
Labels: A new book on the History of Greater Manchester by Tram, Chorlton artist Peter Topping in collaboration with Andrew Simpson, Manchester in the 2000s, Manchester Trams