Holiday greetings from Chorlton in the August of 1920 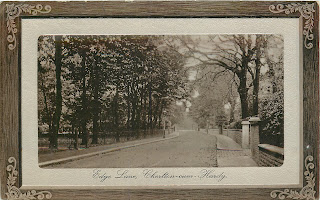 This is the last of the series of postcards produced by Tuck and Sons of scenes around Chorlton.

They were first marketed in 1913 and all but one of the five was specially produced for Robert Sowerbutts who sold newspapers and stationary and ran a circulating library from 105 Manchester Road.

It says something for the series that they were still in use a full seven years after they were first issued.

So this one of Edge Lane was sent in the August of 1920 and Cecil was commenting on his holiday here in Chorlton. 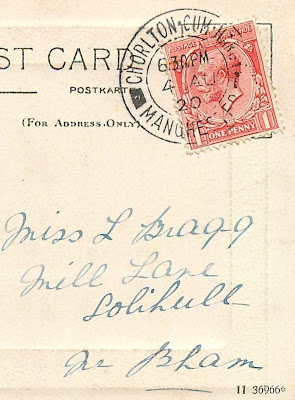 The weather had been good and he had visited Bell Vue on the Monday, watched the fireworks and enjoyed the sport.

He was also keen to alert Miss Bragg that he would be home on the Saturday.

Now given the speed of the postal service he could have his message on the Friday evening confident that Miss L Bragg would have to read with her breakfast.

As it was he sent the card on the Wednesday evening which may been prompted by a walk along Edge Lane which while it was dominated by tall fine mansions would have taken him be degree down small lanes and the open fields.

Email ThisBlogThis!Share to TwitterShare to FacebookShare to Pinterest
Labels: Chorlton in the 1920s, Edge Lane, Raphael Tuck and Sons Ltd