One hundred years of one house in Chorlton part 92 ......... the washing up bottle and the project 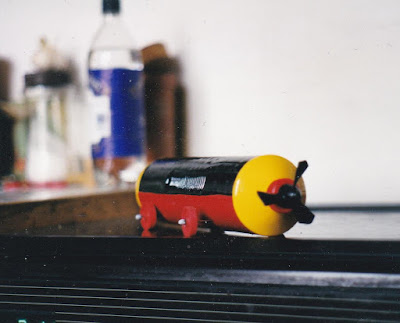 Now I have to confess to never throwing anything away.

Having parents and grandparents who lived through two world wars and the Depression, and who could always find a use for almost any discarded item, I scrutinise everything with a view as to its possible reuse.

Dad kept tons of old screws, storing them in discarded dried milk tins, while mum had her button box.

And while the kids were growing up I saved cereal boxes, washing up bottles and assorted milk tops.

The cardboard cereal boxes were perfect for making space ships while milk tops smoothed out are just perfect for all manner of decorations. 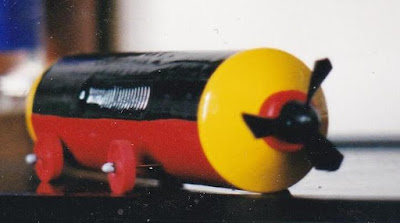 But it was the washing up bottle which provided just what we needed for our Joshua’s science project.

The mission which we had to undertake was to produce a moving object, which we did with Mr Squeezy, a plastic propeller some toy wheels and an elastic band.

And in an age before Internet help we devised it and made it ourselves and the rest as they say was an evening’s work finished off with some bright red and yellow paint which set off the black top.

For years it was a feature on a book shelf and then finally made its way to the cellar and a decade inside a cardboard box, only to emerge into the daylight yesterday.

Pictures; Joshua’s moving washing up bottle, circa 1996, from the collection of Andrew Simpson

*The story of a house,
https://chorltonhistory.blogspot.co.uk/search/label/The%20story%20of%20a%20house