Memories of West Side Story, Flubber, and much more ...... back at the Odeon in Manchester

Now a whole generation has grown up since the Odeon in Manchester went dark. 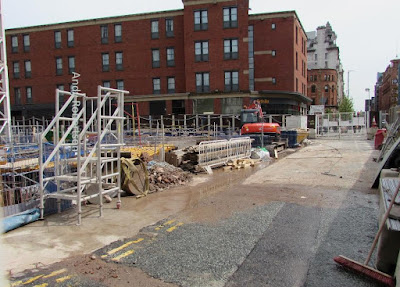 That said there will still be plenty of people who remember it in its glory days just before and after the Second World when a night out at the flicks began with queuing round the cinema for the big film, led in by a uniformed attendant and shown to your seats by a uniformed usherette.

I remember seeing West Side Story, Woodstock and a whole tranche of children’s movies at the Odeon.

And of these, because West Side Story was a special date I splashed out on the Circle.

Back then there was still an air of grandeur about the place and you felt you were taking part in a proper night out.

But the Odeon closed in 2004 and after a long time it finally started being demolished in 2017.

Andy Robertson charted its demolition and was back last week recording the next instalment which looks to be the first stages of the build.

Picture, the site of the Odeon, 2018 from the collection of Andy Robertson

Email ThisBlogThis!Share to TwitterShare to FacebookShare to Pinterest
Labels: Andy Robertson, Manchester in the 2000s