The story of that Victorian pillar box on Edge Lane 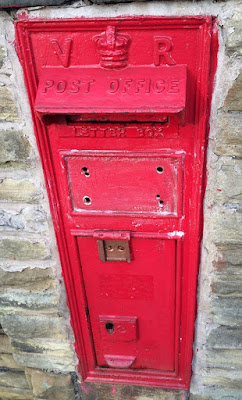 Now I like these two pictures of that post-box on the corner of Edge Lane and Hampton Road.

They were taken by Robert Williamson a few years ago, who asked if it was the oldest pillar box in Chorlton and I rather think it is.

My old friend David Harrop thinks so suggesting that it dates from the 1870s and he should know given that he has a large collection of memorabilia from both world wars and more particularly from the history of the Post Office.

Nor is that quite all, because David has a special connection with this pillar box.

Back in the 1990s he was working in the Facilities Branch of the Post Office which was responsible for the siting and maintenance of post boxes in Greater Manchester.

By then our Victorian box had become redundant replaced by a new one attached to a lamp post nearby.

And to add insult to injury it had lost its door.

On discovering the sad plight of Queen Victoria’s best he instigated a search and the door was found in a garden restored to its rightful place which in turn led to the reinstatement of the said oldest pillar box in Chorlton.

He tells me that people are very sensitive about the position of their local pillar boxes and when the branch moved the one from outside Salford Fire Station it caused quite a storm despite only being moved 30 or so yards. 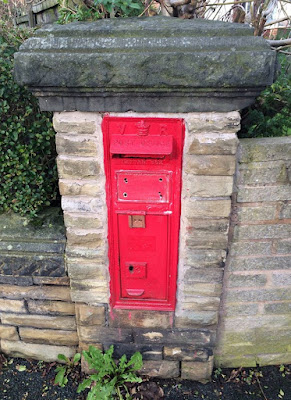 All of which leaves me to say that ours was made by Smith and Hawkes of Birmingham and given David’s interest in all things posty you won’t be surprised to know that in his collection he has a door from a Victorian pillar box.

Now that door isn’t on display in his permanent exhibition in the Remembrance Lodge at Southern Cemetery but there are lots of interesting things to see from post cards and medals from the Great War to a pillar box salvaged after the Coventry Blitz.

David was insistent I should go down to Edge Lane and take a picture but Robert has kindly let me use his.

So a winner all round, and for those wanting a bit more local history our box will have arrived on Edge Lane sometime in the 1870s reflecting that suburban creep which had seen fine new villas constructed by the well to do spreading up from the station at Stretford.

But that is another story.
Bit in the meantime I received a correction to the story, Ian has pointed out that, "technically the box at Edge Lane is not a pillar box, but a wall box, designed to be inserted in a wall.

Pillar boxes are the tall round ones or the 6-sided Victorian ones known as "Penfolds" [after their designer].

Pictures the Edge Lane pillar box, 2014 from the collection of Robert Williamson