On missing the Airport train in Manchester Piccadilly ....... the sunlight story 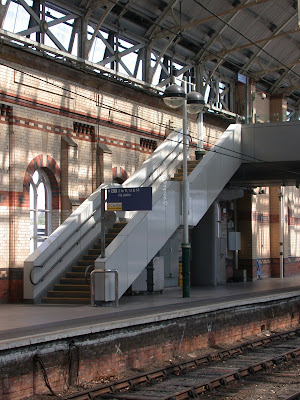 Now I like railway stations and I have lots of favourites in the collection.

Of the Manchester ones, Piccadilly stands out.  It may not have the sweeping grandeur of Victoria or the iconic Armadillo roof of Oxford Road but it was where I first came into Manchester from London 49 years ago and I like building.

Some friends decry the new forecourt arguing it looks too much like an airport which it does, but it also does the business, and is streets better than the tired 1960s makeover which had become quite shabby.

By comparison the new one is bright, busy and offers a window out onto the city.

But I also like the carriage shed, and especially the brickwork on either side of the platforms.

On a bright sunny spring day the place is magnificent. 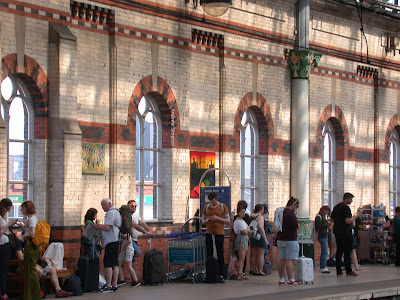 And that is a lead in to the fact that on Bank Holiday Monday I missed the train for the airport, and with time on my hands I wandered about, watching as people whizzed past me in expectation of the journey to come or waited patiently for the arrival of their connection.

There is also plenty to see, including the war memorial to the men of the old railway company who served in the Great War, and out on those annexe platforms you get good views of the city.

All of which I visited, but the frequency of the Airport trains is such that I didn’t have long to wait and had a choice of platforms.

So that is about it.


Pictures on a Bank Holiday in a railway station, 2018 from the collection of Andrew Simpson