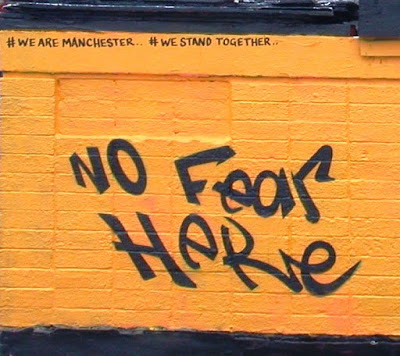 This was written  just under a year ago and was in response to the murders at London Bridge in June 2017 and the bombing here in Manchester a month before.

I thought of re writing it but decided to let it stand.

As my adopted city prepares for that concert today my thoughts are with London where I was born spent my youth and where many of my family live.

I won’t attempt to write about the terrible incident, which will be done during the day and into the week by people far more eloquent than me. 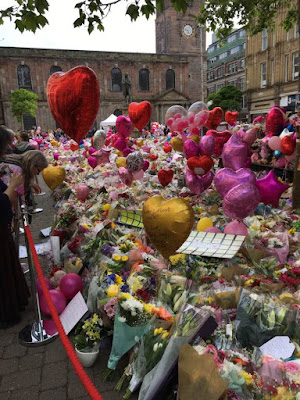 So I will just leave it at that, and instead post two of the pictures which have come to symbolise how we in Manchester have reacted.

We are #Manchester ....# We Stand Together, and No Fear Here was painted on the wall in The Northern Quarter, and still people come to St Ann’s Square to lay flowers and pause for a moment’s quiet reflection.

Pictures; No Fear Here, May 2017 from the collection of Andrew Simpson, and in St Ann’s Square, May 2017, courtesy of Jt Thomas

Email ThisBlogThis!Share to TwitterShare to FacebookShare to Pinterest
Labels: Manchester in the 2000s