The onward march of the new urban living ....... part two 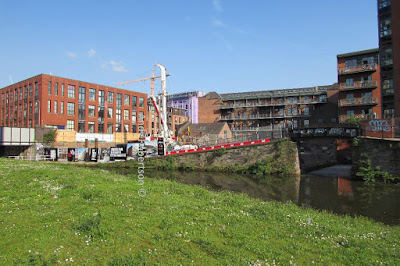 I like these two pictures by Andy Robertson because they capture what has has been going on by the Duke’s Canal, as it makes it way past Cornbrook and Hulme.

In a matter of just a few years, the old mills, warehouses and timber yards have gone and in their place there are blocks of apartments.

And if you wander down to Woden Street, or along Chester Road, those blocks already inhabited are being joined by new ones which are being constructed as I write. 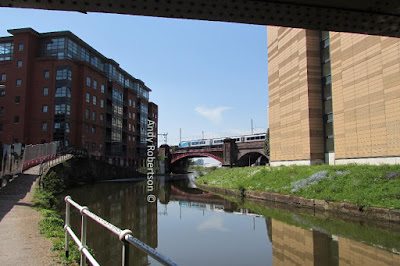 At least one of those beside the Canal advertise, “prestigious hotel style development of one, two and three bedroom apartments” offering “riverside living”.

All a bit different from when the canal boats slowly made the journey into the city in the 19th century.

Back then the backdrop would have been factories and warehouses and a little earlier, open fields.
Still as Andy’s pictures reveal there is a bit of green stuff.

Location; along the Duke’s Canal

Pictures; the new developments along the Canal, 2018, from the collection of Andy Robertson