Now, without wanting to be disrespectful there will be a dwindling number of people who remember The Railway Inn in its heyday. 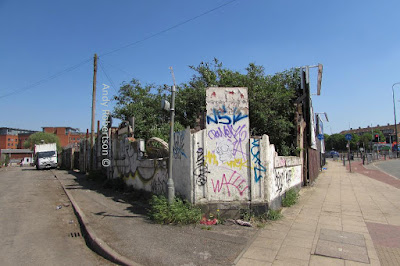 It stood on the corner of Cornbrook Road and Dover Street, and over the last few decades has slowly been disappearing.

Until relatively recently the walls up to the first story were still there and the name was still visible, but bit by bit even the walls have diminished.

Andy Robertson was last there in 2017 when one of the old doors was still in place.

But even that is now almost just a door knob. 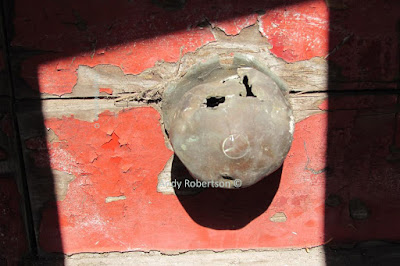 And all around the pub site, new shinny blocks of flats are rising into the sky and I do wonder whether if the Railway Inn had clung on it might just had been reborn as the local for all the new residents who will soon be living close by.

They may well have been attracted to one of our old fashioned boozers, and brought  their friends to an "authentic bit of the area".

That said I suspect it would have reinvented itself.

The smoke stained wall paper and battered furniture would have become a feature, but the beer would be designer and the food, will have that long  journey from pickled eggs and curled up cheese sandwiches into plates of sun dried tomatoes, and Rösti with a side salad of green leaves dressed in a light pesto dressing.

Andy had been going back to the pub for years recording its demise and for those wanting to see his earlier pictures, along with the pub when it served mild and bitter and pork scratching, just follow the link.

In the meantime I will leave you with Andy’s comment, “quick trip to Cornbrook. The Railway is becoming less and less but at least it still has its door knob”.

Pictures; all that is left of the Railway Inn, 2018, from the collection of Andy Robertson